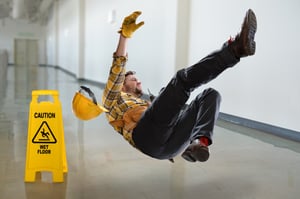 Industrial manufacturing facilities are a mine field of accidents waiting to happen. From injuries due to workers falling, vehicle-worker collisions and improper use of safety equipment, employees can be seriously injured … or even die.

According to the Social Security Administration, benefit payments under workers’ compensation programs totaled $61.9 billion and the Bureau of Labor Statistics states that there were 5,250 fatal work injuries recorded in the United States in 2018.

Enter Everguard.ai, which is lowering these industrial-safety statistics by utilizing Artificial Intelligence.

“We’ve built a system that assesses dangerous situations and gets ahead of it so we can alert workers and prevent them from getting harmed,” says Sandeep Pandya, CEO of Everguard.ai.

With Pandya at the helm, Everguard.ai has shifted the paradigm from reactive to proactive to make industrial environments safer. “We are providing solutions that include wearable technology with haptic feedback that is tied in to Sentri360,” he says. “Some employees might think they can cut corners because they’ve been there for 20 years, but Sentri360 is monitoring the worker and behavior to potentially save their lives.”

Prior to Everguard, Pandya served as President of Netradyne, a 100-person venture backed startup focused on commercializing ML/CV innovations in the areas of Autonomous Vehicles, HD Mapping and Fleet Telematics. He also served as VP of Product Management at Qualcomm, where he was instrumental in driving the introduction of more than two dozen of Qualcomm’s leading Snapdragon smartphone and 3G/4G IOT baseband chipsets. He also worked at The Beckman Institute for Advanced Science and Technology and The National Center for Supercomputing Applications.

“AI is awe-inspiring, despite pop culture implicating it as being sinister,” says Pandya, who earned an MBA from Northwestern University’s J.L. Kellogg Graduate School of Management and BS and MS degrees in Computer Science from the University of Illinois at Urbana-Champaign. “My personal mission is to use it in a way that can help people. I took the job at Everguard.ai because I wanted to be the CEO of company that was going to use AI for good. At our core, we are an AI innovator and pioneer.”

Legacy industrial safety solutions involve a combination of direct human supervision, monitoring of CCTV footage, and passive alerts when safety protocols are breached. With Sentri360, upon detection of a safety infraction, workers are immediately notified via haptic feedback on their Personal Alert Device (an industrial-grade wearable), which can be in the form of audio, buzzing or flashing light. Alert video and metadata are simultaneously sent to the safety manager portal for post-event analysis and coaching.

The new technology can be intimidating to workers who aren’t used to it and say that some workers may have anxiety with technology that monitors their activity. “It’s understandable,” Pandya says. “Our approach, fundamentally, is to monitor, not punish workers for violating protocol. The manager can monitor all activity and reward workers that represent good behavior and compliance. The tech is here to help them and see the good work they are doing.”

“Managers used to only be able to monitor safety compliance with clipboards and pens, visually, but as soon as they walk away, that vigilance is gone. With monitoring becoming automated, managers now get to become safety coaches.”

Not only is Everguard.ai’s system helping keep workers safe, but it also has a positive impact on productivity and moral, which, in turn, increases profits. The system minimizes costs and installation and can scale to meet changing site and business needs. The investment for companies varies by volume and scale, such as the size of the plants, how many plants, how the company wants to deploy the technology and how quickly.

The system is currently been deployed successfully at Seah’s steel plants, but can also be used in other industrial environments, such as metal, construction, gas & oil, mining, paper and ship building.

As for the future of the industrial safety industry, Pandya says, “Now that AI and computer vision are becoming more commonplace with devices such as the Ring doorbell, it will be embraced by workers. Modern heavy industry facilities will have AI to work safely.”

With the impacts of Covid-19, deploying the technology is temporarily on hold, but Pandya believes that heavy industries will rebound fairly quickly due to global demand and the fact that it is not consumer based. “The world is experiencing a technological renaissance and that the nexus of AI, computer vision, ubiquitous connectivity, and access to the world’s knowledge base through the internet will fundamentally reshape and improve the way people live, work and play globally. We are helping to lead that charge.”

Everguard.ai today announced that it has joined the Qualcomm® Smart Cities Accelerator Program from...

Forbes: How Autonomous Vehicles Are Paving the Way for Safety in the Workplace

Advancements in the autonomous vehicle industry to overcome the faults of human error are changing...